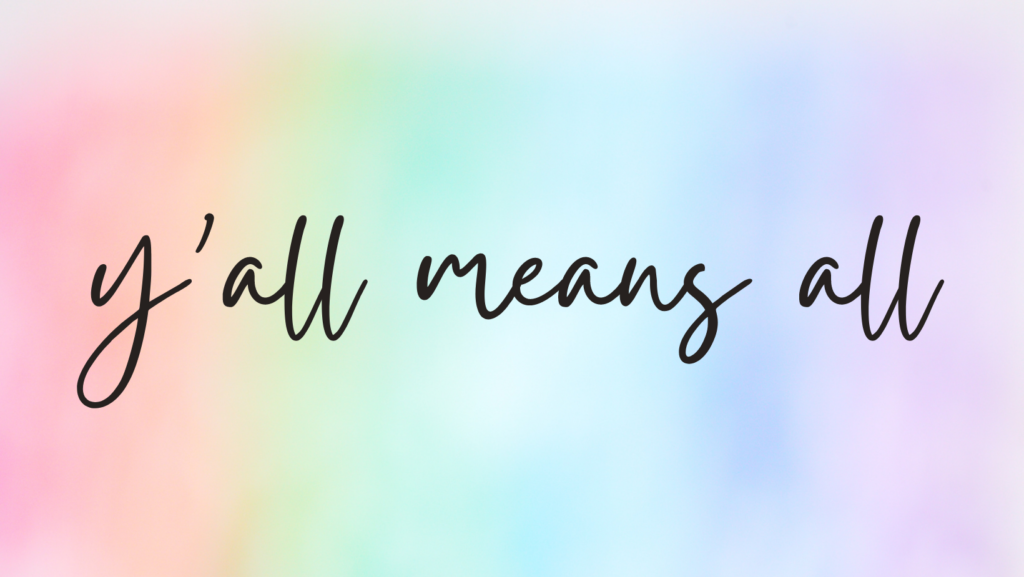 I’ve recently begun working and volunteering in spaces that deeply value gender-inclusive practices and language. As part of these practices, we are encouraged to use phrases like “hey everyone” or “hey y’all” instead of “you guys” for the second person plural.

As I worked to incorporate this change, I couldn’t bring myself to use y’all. I stumbled through greetings, unconsciously defaulting to “you guys” until I began to use “everyone” instead.

When it came to using “y’all,” I hit an internal roadblock, despite spending my formative years in Texas and Louisiana.

Then I remembered the first time I used the word “y’all” in conversation after relocating to New Jersey. I was in a group of new friends, and the conversation literally skidded to a stop.

“How many syllables did you use?” (The number of syllables in the word y’all depends on the degree of emphasis you are using. Apparently I had been quite emphatic.)

Whenever I used the word, I got similar results. Tired of highlighting my differences in every conversation, I began using the regionally appropriate phrase “you guys” instead. This was a loss I processed over many phone calls to my Southern friends, all of whom deeply understood the importance of the word “y’all” in our shared dialect.

Many years later, when encouraged to use the word “y’all” again, it brought up these memories, and with a fuller understanding of the prejudices I had faced based on my accent.

I tell this story because adapting to change is often viewed as a purely intellectual activity. The change leader provides information and guidelines, perhaps some training, and voila! They expect the new behavior to be quickly adopted into the culture of the organization.

But there’s an emotional component to change that is too often overlooked.  Between learning about the change and being able to adapt to it, people need time to process what the change means to them. For me, it meant processing all the ways that my Southern identity has not been acceptable in other parts of the country. It meant a fuller understanding of how I had adopted a “go along to get along” strategy of minimizing my identity to fit in. It meant that, in pursuit of more inclusive language, I had to reckon with the ways I have not been included in the past.

Too often, we write off someone else’s slowness to adapt to more inclusive practices as evidence that they’re uncaring. But when I coach leaders and teams, we often uncover stories of the complex and invisible identities and histories that lie just under the surface. Many times, resistance to change is built on stories of loss and the adaptations people have made to survive. Bringing these stories into the sunlight can be the catalyst for real and meaningful change.

For me, using the word “y’all” isn’t just about gender inclusive language. It’s a bigger and more complex question about the intersection of my Southern heritage and my LGBTQ identities.

Having said all this, maybe it’s time to bring back my y’all after all.