Reflections from a White Guy on a DEI Panel 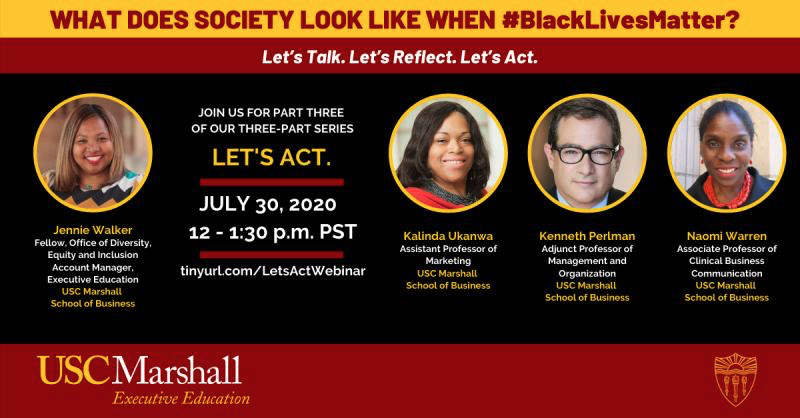 My World Turned Upside Down

“We are going to record the panel discussion today.” These were the scariest words I’d heard in a long time. I have two high-school age daughters at home, we’re in the midst of a global pandemic, and I have an active Twitter feed. Yet, those words were scarier to me than any of that.  “Great,” I thought, “that way when I say something stupid or tone-deaf or privileged, it will be captured for eternity and later published to a globally-accessible site.”

Let me rewind to explain how I got here and why it was so unnerving.

I rarely experience insecurity in my daily life. I am at the point in my life where I love the teaching, consulting, and mentoring work I do. I love being on-stage or on-screen in front of large groups. I love being the lead facilitator or teacher or questioner or partner. Last week, I was invited to present on USC Marshall School of Business’ Black Lives Matter panel.  It was a rare instance when I had neither legitimate authority nor social authority. That’s what made it so unnerving.

I was on the panel with two remarkable colleagues from USC Marshall. Both hold PhDs. Both are full-time faculty. Both are researchers. I am none of those three. I am an adjunct, a part-timer. In the classroom, I am the professor. I have the legitimate authority vested in me by the university. In my consulting career, I am a managing director at CultureSync. I have the legitimate authority granted to me by the partnership to do pretty much as I please.

In this forum, I was the junior-most person on the panel. While my colleagues did everything they could to welcome me and set me at ease, I still felt the insecurity of the comparison inside my head.

Another source of my usual comfort and authority is my…privilege. At USC, we have received some excellent training in diversity and inclusion over the past many years. In one of those classes, the instructor presented 13 social identity groups. These groups have characteristics where one group is considered the “one up” and all the others are “one down.” I learned that I am one-up in 12 of the 13 social identity groups. White. Male. Heterosexual. Physically fully able. Educated. Married. With Children. Etcetera. Even the one where I am the one-down, it’s that I’m Jewish and not Christian. So…not that far down.

Insecurity as a Motivator

One skill I learned from my parents was that luck and preparation are intrinsically connected, and the only one you could affect was preparation. So I prepared–more than I’ve prepared for something in years. The facilitator sent us the questions in advance. I wrote long-form answers to all of them. I never do that. I met with the facilitator to narrow the questions I would be asked, then worked with her to adjust my written responses. I rehearsed on my nightly walks with the dog. Again, I never do that.

When I was telling Shaun Spearmon, one of my close friends, about all this prep I was doing, he told me that I was “ally enough” to be there. He said my voice was going to be an important one on the panel, not just because of what I was saying, but because I was a white man with legitimate authority sharing my perspective. He said BLM panels will be limited in their impact if they only have black voices. While it’s a win to have so many powerful black voices included in so many new and existing forums, I have an important perspective to share as a middle-aged white guy. He told me this is a great place to practice being an ally.

That’s when another thought hit me. I was living in Shaun’s shoes for the first time. He and I used to be colleagues, each of us having moved to new career opportunities since we worked together. But thinking back, he had always done more preparation for each session than I had. He always had more detailed plans about the sessions. He controlled more of the variables than I did. He even dressed better than I did…always…and he still does.

I think about how exhausted I was going into the panel and how relieved I was when it was over and I had not obviously screwed up (that I know of). I kept thinking about all the other work I had to do because I had made space for the BLM panel prep. Finally, I could get back more time and get back to doing more improvising and less scripting. Shaun, who is black, doesn’t get that same privilege.

The Power of Now

As we are talking more and more about diversity, race, inclusion, equity, and justice than we have in recent memory, I am also realizing something else. It was great that I had a voice on that particular panel. More importantly, we are collectively learning and realizing so much in this moment–making new connections, and making different decisions which will help us get on a better path faster.

At my firm, which is woman-owned and led, we have great programs on diversity, inclusion, equity, and justice. They were developed by our lead curriculum designer, who has a remarkable family history and heritage. We partner with our friends and colleagues to bring in other voices (e.g., LBGTQ, BLM, BIPOC, and more). While I am used to being the “sage on the stage,” I have learned to shut the hell up and let other voices be heard. And they are crushing it.

Now that we have these new connections, we have new voices in new forums. We have more awareness of their contributions. We have an opportunity to expand our own footprints. We can take on larger issues, take bolder stances, and push others harder to move faster.

We shouldn’t have to. America has had ample opportunity to address this multiple times in each century since Europeans landed on the east coast. Each time each generation has failed. It’s sad that I (and others) did not get here sooner. Now that we are here, finally, we have the opportunity, the capability, the awareness, the relationships, the data, and the momentum to start dealing with it once and forever.