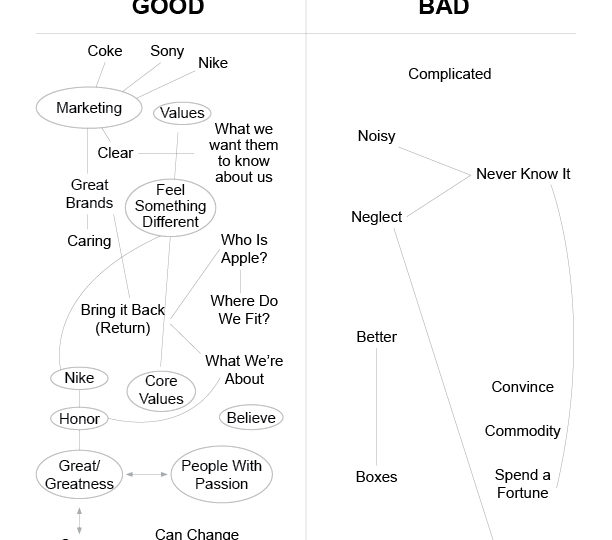 Word mapping is one of the most valuable leadership tools I’ve ever seen. It causes people to think you read their minds, can be deeply seductive and (if you could go back in time), it can even be used to make Steve Jobs think you’re a genius. Use it correctly, and you can build deep rapport with another person in under a minute.

What is Word Mapping?
I define word mapping as “noticing how another person uses words, in connection with other words, until you see the underlying linguistic structure they use to make sense of situations, other people, business, and life.” You can then use the word map you create to say just a few words, and if done well, the other person will respond with wonder. Many people tell those I’ve trained in this technique: “no one has ever understood me that deeply, that quickly.”

How do I do it?
Here are the steps to using this technique:

3. To get to the point where you can do this, let’s practice on two videos.

Watch a quick interview with U.S. Speaker of House John Boehner, from a few years back. Because this interview is short, your word map will be simple. (Set your politics aside for this exercise.) Do one on your own, and then compare it to the one I made.

Here’s what I drew for my Boehner word map: 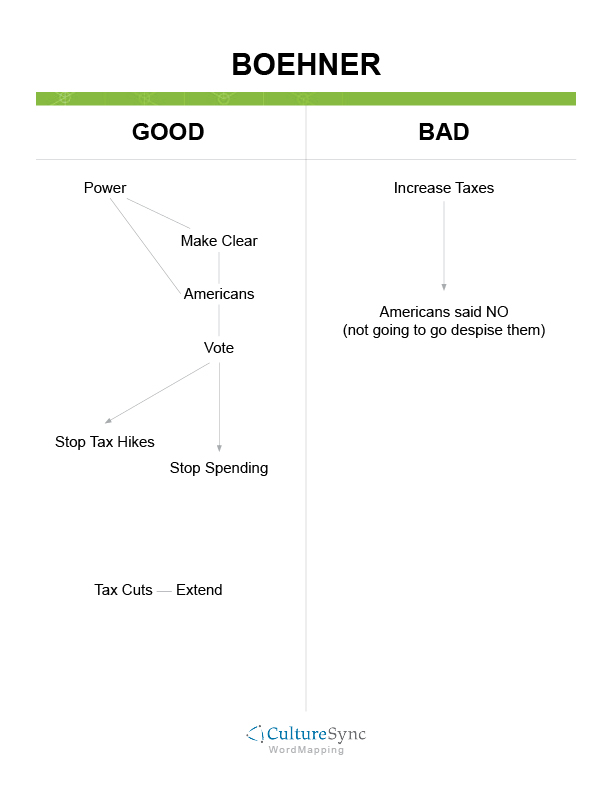 Do another word map for President Barak Obama from April 2011. It’s about the budget compromise that was being discussed at the time. (Again, set your politics down.) Because this video is longer, your word map will be more complicated.

Here is my Obama word map: 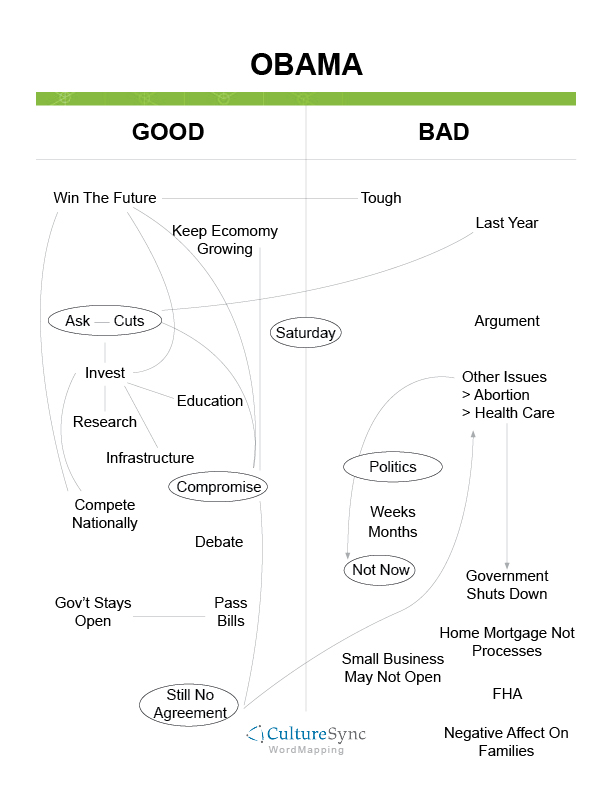 4. To use the word map to create instant rapport, create a message that repeats back—in the person’s actual words—what your word map reveals about the person.

For Speaker Boehner, it might be: “This is about one simple thing: following the lead of the American people. They made it clear they want spending to stop and to stop the tax hikes.” To see how I got to this message, look at my word map for Boehner.

For President Obama, it might be: “The Republicans keep trying to make this complicated, and it’s not. It’s about cutting and investing. Investing needs to focus on research, education and infrastructure. Shutting down the government isn’t an option, because that will hurt everyone.”

Next, create a “common enemy.” Based on your word map, find something to say that reveals another as a force that stands in way of getting to the person’s aspirations.

For Speaker Boehner, it might be: “President Obama is making this a college lecture, and its actually very simple. He’s trying to confuse the issue by bringing up invest in this, or compromise in that way. He’s a great speaker, but he’s just confusing people. Stay away from the word compromise because it’s a slippery slope that leads to selling out the American people and raising taxes.”

For President Obama, it might be: “The other side refuses to work with you, Mr. President. You gave them the cuts they wanted and still, there’s no deal. For them this is about politics and they’re making it harder than it needs to be. They want to bring all their other issues into this. But, it’s painfully simple. Compromising a little to keep things open is important because it protects the future. They are trying to bully you and you have to stick to your principles or they’ll sell out the future of the country.”

5.  Notice that people use the same words but mean completely different things by them. For President Obama, “compromise” is a good word because it’s tied to other good words like “invest” and “future.” For Speaker Boehner, the word is almost certainly negative because his word map reveals following through on a “pledge” and “making clear” what Americans said in their “vote.” Compromise, for him, will likely link to “increasing taxes on Americans,” which are all bad words according to his word map.

Final Exam
Pull out a new sheet of paper and see if you can construct a word map on Steve Jobs. Play this following video, through the point when the former Apple CEO introduces the “Think Different” ad.

My word map for Steve Jobs is below. 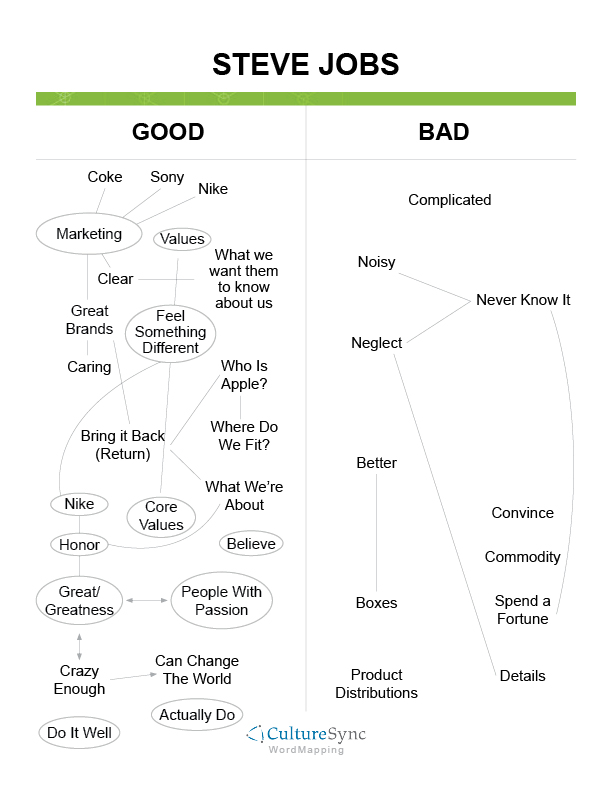 Finally, construct a way of showing appreciation and gratitude, if you were to meet Steve (before his death, of course).

Mine would be: “Steve, thank you for always focusing on what doesn’t change: the core, the core values, and the core belief in passion and changing the world. It’s inspiring to see that in a world where so much changes and there’s so much noise, that leaders can focus on the core, like honoring greatness.”

For extra credit—and if you have more than a minute left—think of how you’d create a common enemy with Jobs.

My version of creating a common enemy would be: “Steve, the problem is that people don’t understand great brands at all. They think it’s about features, boxes, speed, and other things that are just noise. Instead of honoring what doesn’t change, most marketing people tell you stuff that just gets lost. Thanks for getting it right.”

Try This At Home—Carefully
Warning! This is a powerful technique that, once mastered, will allow you to get into another person’s world very quickly. The effect can seem amazing, invasive or seductive to other people. So be careful, and don’t check your ethics at the door. Use this technique anchored to values and with respect for other people. The best defense against this technique being misused on you is to learn it yourself.

As far as I know, this blog post is the first time these ideas have been put together as a leadership tool. I’ve derived this technique with many inputs, most notably Kenneth Burke’s classic article on “terministic screens” (meaning a filter of words). There are related ideas and techniques like content analysis, cluster analysis, linguistic mapping, Warren Bennis’ “leadership as the management of meaning,” active listening, and good old on-the-couch psychoanalysis.

Give it a try with someone you want to get to know, using their speeches (that they’ve written), their emails, or any (lawfully) recorded time when they are answering questions or describing something they care about.

If you would like to be WordMapped by a senior member of the CultureSync team, check out Get WordMapped.