From Hero’s Journey to Leader’s Arc 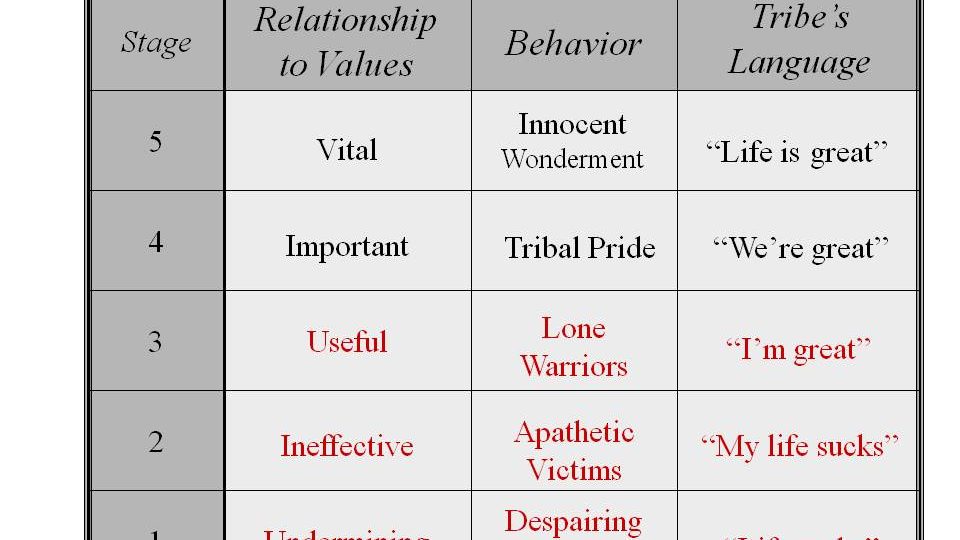 The hero’s journey would have remained obscure except that it became the template a young George Lucas used for Star Wars. The success of that movie, and other stories based on the template, made storytellers around the world produce courses, seminars, and books about this new way of telling a story. Management books caught up in the 90s, with almost all of them telling stories of entrepreneurs, CEOs, or great managers, all storyboarded on the hero’s journey template. Around the same time, a few corporate trainers began offering courses in companies for managers to write their own hero’s journey.

So what’s the problem with all this? It’s that the hero’s journey produces a hero, not a leader. In terms of Tribal Leadership (see the table below), the hero’s journey topples a person posturing at Stage Three – “I’m Great,” down to Stage Two – “My Life Sucks,” and back to up Stage Three—this time owning the “I’m great” zone. It never advances the person to Stage Four or beyond. 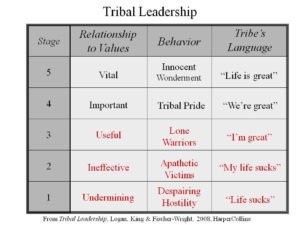 The following chart lays out the major elements of the hero’s journey, using Neo from the first The Matrix movie as our guide. The right column shows how the hero-in-the-making never gets past Stage Three.

Going back to Star Wars, there’s a subtlety most people have missed that shows how the hero just might become a leader. After the first three movies (the Luke Skywalker saga), the hero had defeated evil with the death of the emperor. In the second three movies (the prequel), the real hero was Luke’s father, and his call to adventure was actually moving to the dark side.

Seen in perspective, the entire six movies aren’t about defeating evil, but about integrating it. The Jedi had become weak, easily killed by ordinary soldiers when the order was given. Even the Jedi masters were killed or driven into exile, unable to withstand the power of the “dark side.” In the end, it wasn’t Luke who killed the emperor, but his father Darth Vader—the only one powerful enough to do so. The last scene of the entire saga shows Luke, now clearly at the end of the hero’s journey, with the spirits of his mentors, including his father, now redeemed.

If Lucas ever writes another movie, the interesting question will be: How will the Jedi have transformed? Will they be the celibate, impotent, weak force that they were? The Leader’s Arc (the process of moving from Stage Three to Four to Five) would say no. Luke will become a new kind of tribal leader, building a new Jedi that will fully human and alive, drawing on the full power of the force but without being overwhelmed by the dark side. The new Jedi will have to hold the tension of the light and dark side, always careful and vigilant, and now much more powerful. Only a fully functioning tribe of leaders can harness this power without being destroyed by it.